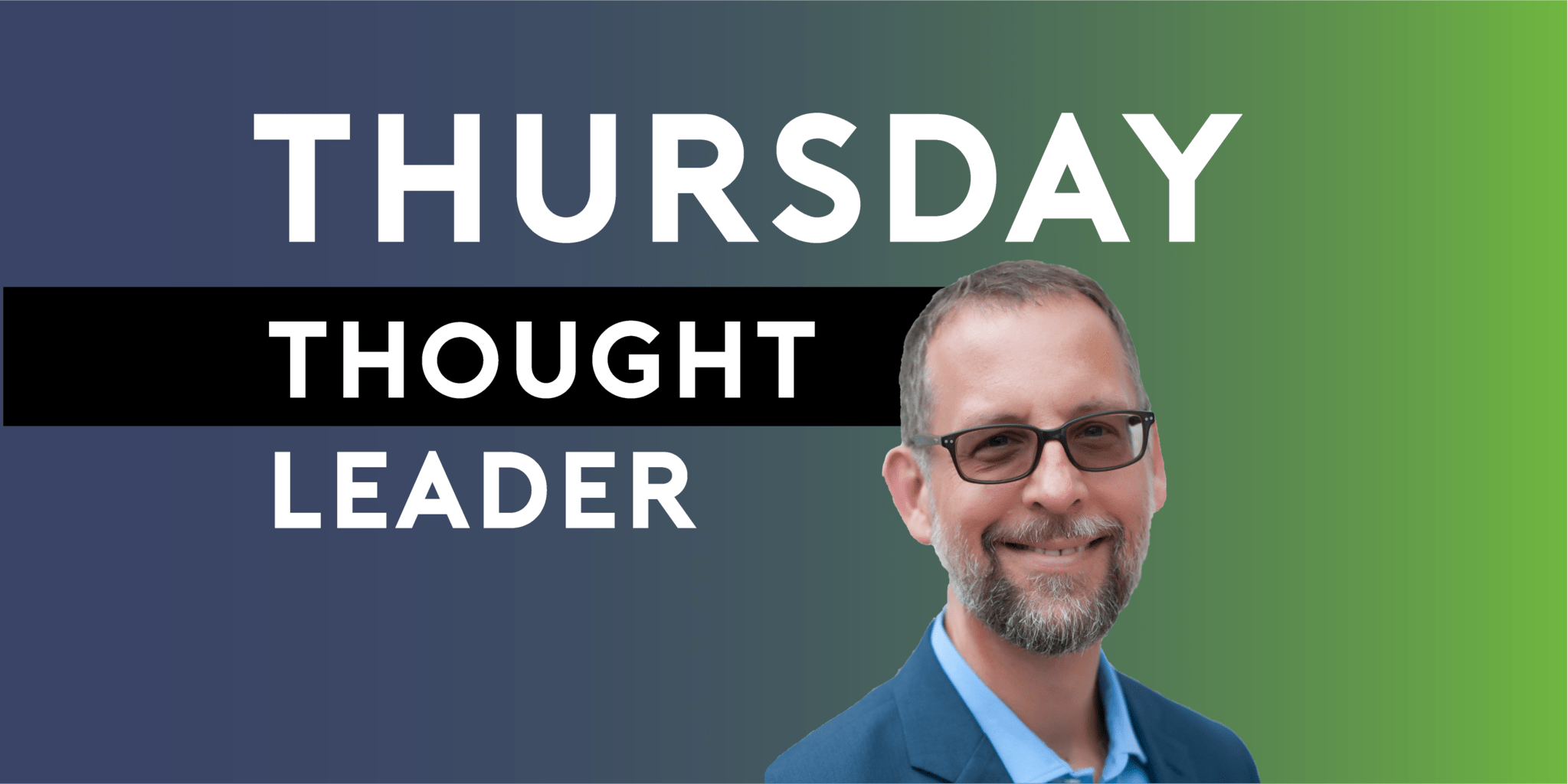 Also known as the RxProfessor on Twitter and amongst his peers, Mark Pew is the go-to man when it comes to answering questions on drugs’ effects in Workers’ Comp. As the Senior Vice President of Product and Marketing at Preferred Medical, a pharmacy benefit management and ancillary services company, he’s dedicated his life to the cause. In fact, the most fascinating thing about him is that he’s in it because he truly wants to make a difference in people’s lives. It is what drives him every day.

With that known fact, how could you not be curious about Mark? We sure were! He took the time to chat to us about how he ended up here and what keeps him motivated.

Whether you’re looking to understand pain management in workers’ compensation or know more about Mark’s genuine philosophies, you’re in for a treat. 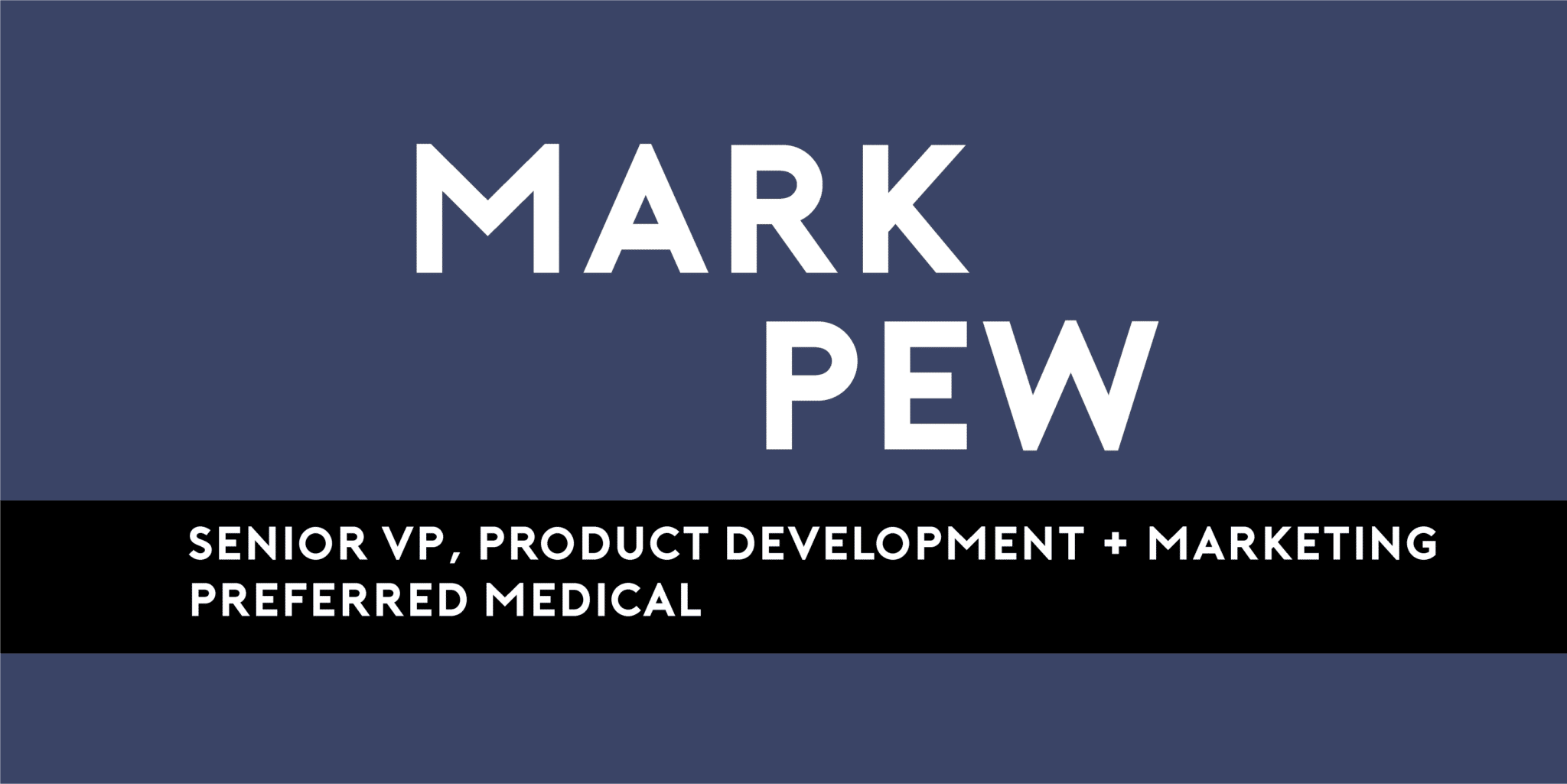 You’re best known as the RxProfessor on social media. How did that branding come about and what has been the most satisfying thing about it?

I started working on the workers’ compensation opioid issue in 2003. As part of that development process I read thousands of pages of medical records, reviewed thousands of drug transactions, spoke on the phone and in-person with 100+ highly respected clinicians around the country, read treatment guidelines and clinical papers and articles, and in general armed myself with a perspective on best practices that synthesized everything I’d absorbed. Then in March 2012, I received an unsolicited opportunity to teach a CE course in Phoenix on what I had learned.

Frankly, I was petrified the first time I had to get up in front of a crowd (30 people for that inaugural event) and explain my perspective. But I had a “groupie” who motivated me to try it again, and again, and again. Eventually, I developed a reputation for being an educator on the subject. In May 2015, I thought it would be a good idea to start blogging and tweeting to expand my reach. As I contemplated my Twitter handle, it came to me: My focus is on drugs (“Rx”) and I’m an educator (“Professor”). Voila! I’m a relatively simple guy and thought the simple self-defining term of RxProfessor would be a good start. It’s been a fun ride since then.

What feeds my passion is the possibility that I can create an epiphany for how to best deal with the intersection of chronic pain and appropriate treatment. Because of my consistency in message and posts my reach has expanded well beyond work comp. That is because when I’m talking or writing about the opioid epidemic and better ways to manage pain, it’s a personal story to so many people. Yes, opioids and the corresponding drugs associated with the side effects has been a real problem in work comp. But claims adjusters, nurses, attorneys, doctors, and state regulators in my audiences have personal lives too, with family members or friends that have dealt with complex drug regimens, dependence, addiction, overdose and even death.

So when someone comes up to me afterward and shares a story, or e-mails me how I helped convince them to change something in their life, or I see someone writing notes furiously so they can apply it to their business and personal lives … that fuels me to the next presentation or blog post or tweet. I know it may sound corny in today’s world, but making a difference in people’s lives provides satisfaction to me beyond measure. 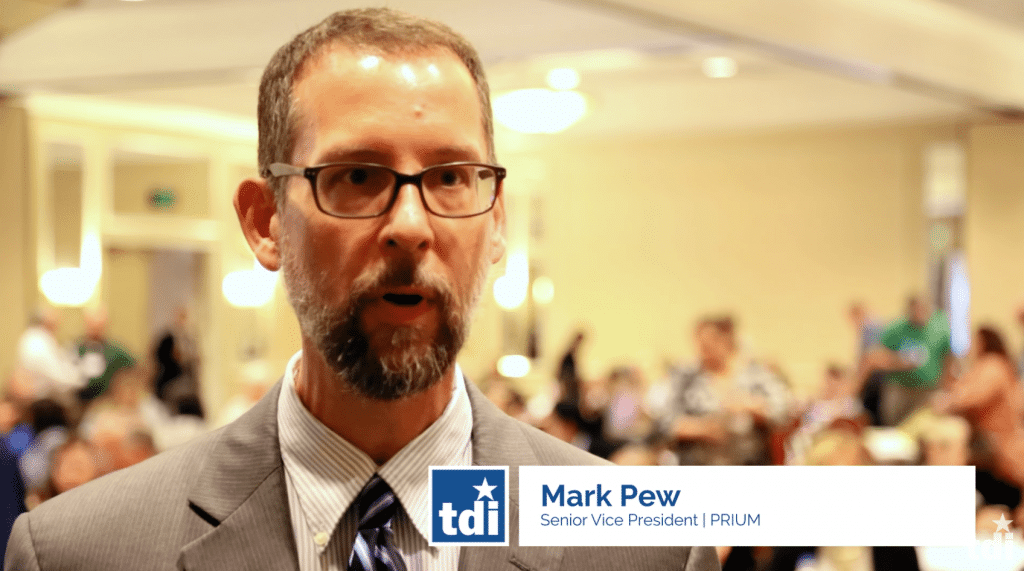 Image from Texas Department of Insurance.

In your current role as Senior Vice President of Product Development and Marketing at Preferred Medical, you have many responsibilities. Which is the most important to you and what is your goal at the end of the day?

I have a “big picture” boss who has one guiding principle for what I do – make an impact by leading. Whether that be speaking at an event or on a national webinar, or publishing an article or blog post, or tweeting my quick two cents worth, or being quoted by publications as an expert, or meeting with state regulators on ways to battle the epidemic and #CleanUpTheMess, or lobbying state legislators on behalf of best-practice laws, or networking to meet really smart people that can educate me even further … It’s all included within the scope of my job.

From a business standpoint, I’m responsible for translating that thought leadership into new products and services that will assist our customers as well as a marketing message about “doing the right thing.” It’s exciting to be in a company that is willing to redefine “pharmacy benefit manager” by tapping into my experience and perspective. I know it seems strange that a PBM would be interested in (even encouraging) non-drug options for serving their customers, but we think differently. Whatever my do-list entailed, my goal at the end of each day is to have made a difference. To have matriculated the ball down the field ever so slightly to change how we as Americans and in Work Comp deal with pain. Some days are better than others between progress and setbacks. But if I remain relevant through my own personal education via collaboration with really smart people, and can articulate it in a way that is accessible to fellow laypeople, then I have fulfilled my duties to not only my boss but also to my personal and professional growth. 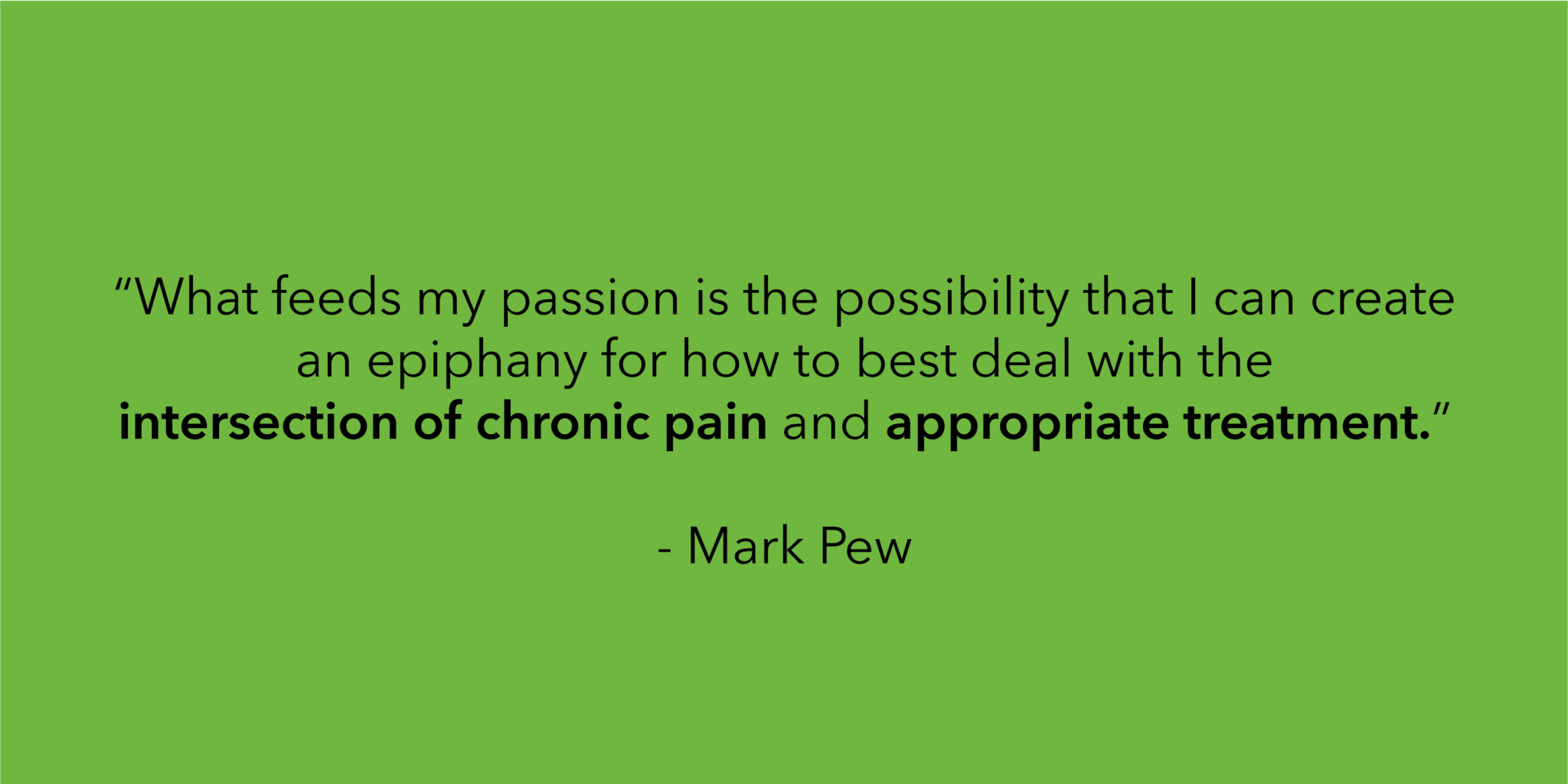 You’re an advocate of preventing the overuse of pain medication, especially in the workers’ compensation sector. It’s such a huge task, but you’re tackling it so well. What’s your technique and how do you hope to see change unfold?

I try to take difficult and complex subject matter and make it accessible to all. I speak in simple language. I infuse everything I do with the personal passion for change that drives me. I try not to be inconsiderate or rude or arrogant to anyone I meet, but instead be respectful while being firm in my convictions. I think the fact that I have come so far in such a relatively short time in a way that I could never have imagined (believe me, I look at what I am doing now and it blows my mind) keeps me humble.

I know I’m just a guy with a well-informed opinion and an apparent gift for communication. I think people can innately sense transparency and genuineness and honesty. When I make mistakes, people are willing to give me a second chance because they see I’m trying hard to do the right thing. The change is unfolding now, obviously due to a variety of people (not just me) trying really hard to do the right thing. I’ve seen prescribing behavior and attitudes change with doctors. I’ve seen claims adjusters become more compassionate. I’ve seen C-Suite executives grasp the bigger picture of helping the patient or injured worker gain control over their pain without being sedated. I’ve seen state regulators and legislators push past the inertia of the status quo and get serious about the epidemic. I’ve seen family members and friends willing to intervene in dangerous behavior. I’ve seen every single conference have at least one session on opioids (that trend started in 2012 … just sayin’) and the media publish stories constantly on the epidemic to the point that nobody can claim ignorance.

While there has been palpable progress, there is still much more to do. I’ve had two easy to understand campaigns to help thematically lead that charge.First was in January 2017 with #CleanUpTheMess to describe the over-reliance on prescription drugs to “manage” pain begun in the mid-1990’s that created a mess we must now cleanup by helping people find less risky/more beneficial treatment options. In January 2019 I launched #PreventTheMess which is to focus on the best treatment choices on Day One (when bad choices can lead to bad outcomes, that day and beyond). The first rule of holes is to stop digging. By evidence of what payers (including work comp) are willing to reimburse for, the media coverage of not just the mess but also the cleanup efforts, state and community focuses on early intervention, and attitudinal changes by patients and providers we are making progress.

Are there enough payers paying for the right care? No. Are there enough patients educated on the options to be engaged in their treatment choices? No. Are there enough physicians changing their prescribing patterns? No. Does our healthcare system and society still need a lot of change from that status quo? Yes. So we still have a loooooong way to go, but we’ve already come soooooooo far that it gives me hope of victory. Which leads me to the secord part of my tagline — educator and agitator. For positive change.

Is there one story that you hold near and dear to your heart that’s related to your mission?

There have been so many personal stories that have been shared with me. I think back on a CE presentation I did in Virginia a couple of years ago to only ten people. Small, kind of disappointing, crowd. A vendor was there who had sponsored the cost of the CE. Often the vendor representatives give their marketing pitch before I get started and then leave. This time, he stayed. He listened intently. He followed me outside because he had a story. His brother-in-law was addicted to prescription painkillers. It had gotten so bad that he refused to allow his children to visit their Aunt and Uncle given the circumstances. They had tried a variety of interventions to convince the brother-in-law to seek help and thus far had not been successful.

The reason why he chased me down in the parking lot was because he wanted a copy of my powerpoint presentation to share with his brother-in-law. This random non-doctor from Georgia had made a compelling argument that the drugs he was taking were doing more harm than good. I gladly e-mailed to him my presentation. I never heard back so I’m not sure whether my content helped the brother-in-law to finally understand what he was doing to himself and his family. Chances are it didn’t. But what if it did? Wouldn’t that make my trip to Virginia for a small group worthwhile? Absolutely.

What are some daily rituals you partake in to ensure a strong and productive day?

I try to exercise daily, whether at home or on the road. I have this neat 7-minute exercise app on my smartphone that I use if I can’t get into a fitness center or outside somewhere. I try to eat well because I lost about 30 pounds in 6 months in 2014 and have worked to maintain my weight since then. I try to stay active by doing simple things like walk the airport concourses rather than riding the shuttle or even the “moving sidewalk”. I treat Coke Zero as a periodic dessert and drink lots of water (so I get lots of steps going back-n-forth to the bathroom). I try to maintain my spiritual health. I try, and don’t usually succeed, in getting 7-8 hours of sleep each night. I read … constantly (not fiction or non-fiction or comic books but content from around the globe on subject matter relevant to The RxProfessor).

I absolutely live in LinkedIn to maintain relationships and on Twitter for interesting content. I group text with my wife and three kids. I use my calendar to structure my to-do’s (if it’s not in Outlook, it’s not gonna happen). And I try to maintain a “big picture” perspective on what I do and how I live. Being The RxProfessor is a lifestyle choice, because I can’t preach one thing and do (or look like) the complete opposite. To be credible, I have to live credibly.