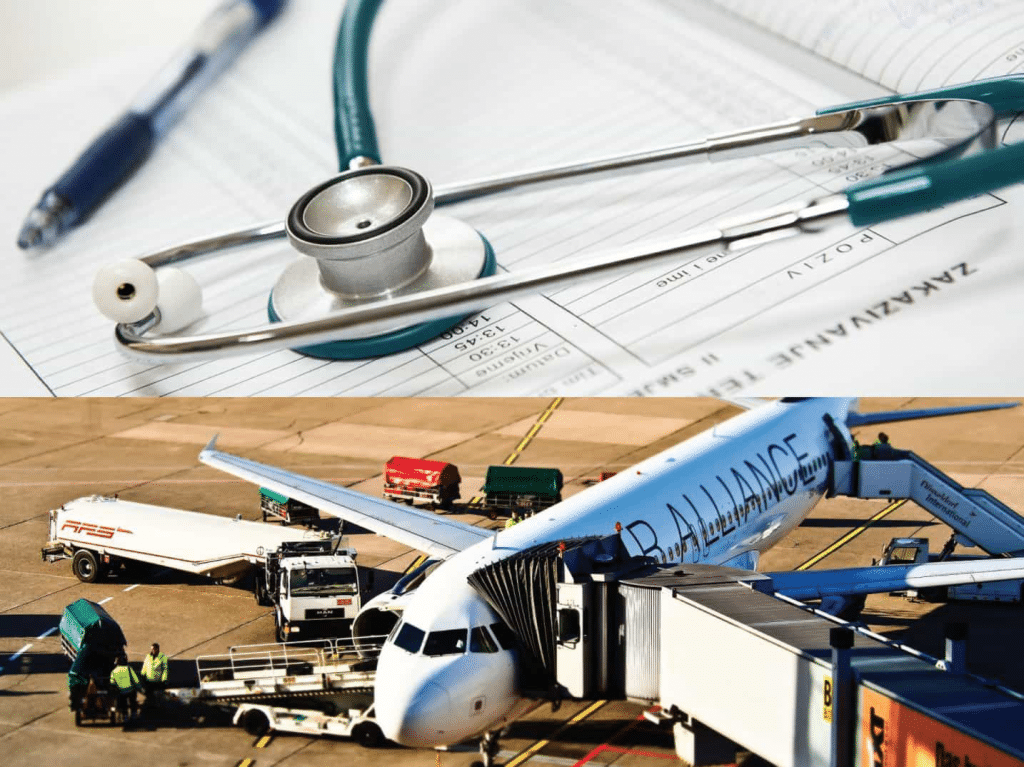 Air travel and healthcare have operational parallels, but the key difference for air safety lies in its well-researched top-notch policies and procedures. How can we bring healthcare up to speed? Let’s talk.

What does it mean to fly?

Air travel is a part of daily business life for many around the world. The concept of being able to travel from Atlanta to Los Angeles in under five hours was inconceivable 100 years ago, and even just 50 years ago it was reserved for only the wealthy. Now, air travel is so commonplace, the prospect of being in a pressurized cabin at 35,000 feet and cruising 500 mph is not scary to business people and mothers with children alike. Why? Because of air travel’s safety record.

Any kind of accident – on the ground, in the air, on the way up or way down – is so infrequent that it when it happens, it dominates the news cycle. Whether it’s Germanwings Flight 9525 in 2015 that was deliberately flown into the French Alps by the co-pilot, or the Malaysia Airlines Flight 370 that mysteriously disappeared from radar in 2014, or US Airways Flight 1549 that Captain Chesley “Sully” Sullenberger and First Officer Jeff Skiles landed safely in the Hudson River in 2009 after a flock of birds hit both engines, accidents make news.

According to Gunnar Garfors, there were 37.4 million flights scheduled in 2014, working out to an average of 102,465 per day. Wikipedia’s “List of Accidents and Incidents Involving Commercial Aircraft” reported there were six crashes in 2014 resulting in 920 deaths and 21 injuries. According to curiosity.com, the odds of dying in a plane crash are one for every 1.2 million flights, whereas odds from dying in a car crash are one in 5,000. All of these numbers point to the idea that although accidents can happen, air travel has statistically been proven to be safe.

How has the aviation industry accomplished such great safety measures?

The aviation industry has learned from past mistakes and has created a series of checklists that ensure safety. For instance, the industry learned about wind shear from the August 1985 crash of Delta Airlines flight 191 that killed 163 people and injured 26. The Lockheed L-1011 was attempting to land at Dallas/Fort Worth International Airport when the crew encountered a thunderstorm microburst. The National Transportation Safety Board determined “that the crash resulted from the flight crew’s decision to fly through a thunderstorm, the lack of procedures and training to avoid or escape microbursts, and the lack of hazard information on wind shear.” That finding caused the aviation industry to implement education and procedures to avoid that situation in the future. This has resulted in some crazy gyrations of flight paths and delayed flights, but greatly diminished the possibility of repeating a similar incident.

What is a typical aviation safety procedure?

Pilots walk around the exterior of their planes before each flight and have a clipboard full of items to verify in the cockpit before starting the engines. There are policies on top of policies. And whether it’s a short flight from Atlanta to Birmingham or from Atlanta to Los Angeles, the completion of those checklists is an inviolable standard. According to Patrick Smith’s Ask the Pilot, there are twelve generalized categories of checklists:

These do not include the policies and checklists for malfunctions, emergencies and other non-normal situations.

In summary, the increasing safety and security of air travel is due to the ability to learn lessons from the past and incorporate them into checklists, policies/procedures, and best practices that are performed for every single flight by every single pilot. It is consistent application of objective standards. 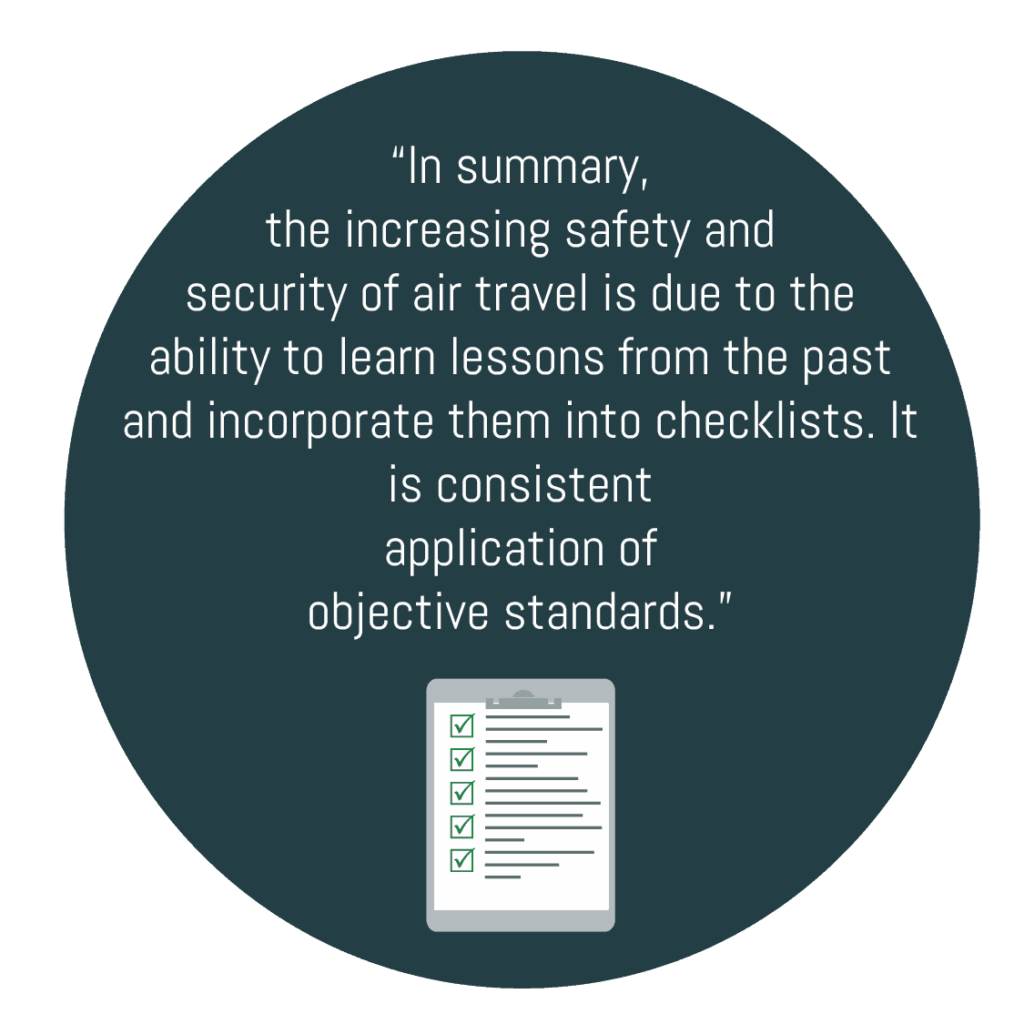 Why should healthcare be any different?

Treatment guidelines created from a foundation of evidence-based medicine follow that same principle. They do the following:

These guiding principles would apply to treatment guidelines as well as air travel safety.

For busy clinicians who do not have the time or inclination to read new clinical studies or research papers on a regular basis, treatment guidelines create a quick look-up when confronted with new or unique circumstances. For clinicians who graduated from their associated medical schools many years or decades prior, treatment guidelines can be an educational tool to understand new methods for helping patients heal and help clinicians stay current and relevant in the ever evolving healthcare landscape.

In workers’ compensation, treatment guidelines can also provide great insight into the unique occupational medicine paradigm that includes potential secondary gain and a heavy focus on function and return to work. They can help in better understanding the quantification of impairment and disability. Plus, they can help make the most cost-effective decision, both near and long term.

So, what’s the fuss?

With this knowledge in mind, some clinicians still fight the concept of treatment guidelines, calling them “cookie cutter” and “cookbook medicine.” This is short sighted.

As an example of the positive impact of guidelines, consider the story recently published by the Washington Post: “Surgeons Were Told to Stop Prescribing So Many Painkillers. The Results Were Remarkable.” There was no guidance for surgeons on how to provide pain management after surgery. The Dartmouth-Hitchcock Medical Center in New Hampshire knew there were too many opioids being prescribed, and its in-house research determined this was largely due to a lack of understanding and guidance. The researchers found that patients consumed only 28 percent of the opioids prescribed to them for five outpatient surgeries: partial mastectomy, partial mastectomy with a lymph-node biopsy, gall-bladder removal, and two kinds of hernia repair.

So the medical center created guidelines for what to prescribe, how much and for how long, for those surgeries. The results were remarkable indeed. The total number of pills declined by 53 percent. Only one patient came back for a refill. They are now studying more serious in-patient surgeries to see if similar results can be found. According to Richard J. Barth, chief of general surgery, “Doctors are very data driven, and if there are specific guidelines, people are going to follow them.” In other words, the lack of coherent guidelines left prescribing up to the personal experience of each individual doctor, and by all accounts, they over-prescribed. Creating guidelines, informed by data, helped those doctors make better decisions while not degrading the quality of care for the patient. Just like a pilot basing their decisions solely on personal experience could have a fatal blind spot, a doctor similarly will produce better clinical outcomes if they have access to all of the best information on which to make a decision.

With Medicare’s value-based, outcome-oriented measurement that is now moving into work comp, delivering the best possible care based on the best science that is most cost effective (not just for that day’s procedure but to mitigate future costs associated with sub-optimal or even failed results) is an expectation. With consumer education via TV and radio advertisements and with websites dedicated to self-diagnosis, clinicians are under increasing pressure to know everything about everything. Why wouldn’t someone want access to reliable, updated, vetted, aggregated best practices to help make the best decision?

Granted, work comp treatment guidelines often come with accountability for compliance by treatment providers and some form of dispute resolution when opinions differ on what is appropriate. That accountability can bring friction that can often result in a delay in delivery of care which often leads to poorer clinical outcomes. And when there is an adversarial relationship between payer and provider, that process can create obstacles that impede clinical progress.

It’s time for a paradigm change.

What if treatment guidelines were not viewed as a medical-legal burden but as a conversation starter? As an organized method by which all stakeholders can assess options? As an opportunity to accelerate the delivery of care compliant with the guidelines and to slow things down when care is complicated or non-standard? As a way to help deliver better, more consistent care? In other words, as a checklist?

Airlines have found a way to instill a repeatable safety process that has removed the drama from flying in a plane through a consistent application of objective standards. In the world of healthcare and work comp, it is time to follow that same model. There is no better time than now for the healthcare to follow in the footsteps of the aviation industry. 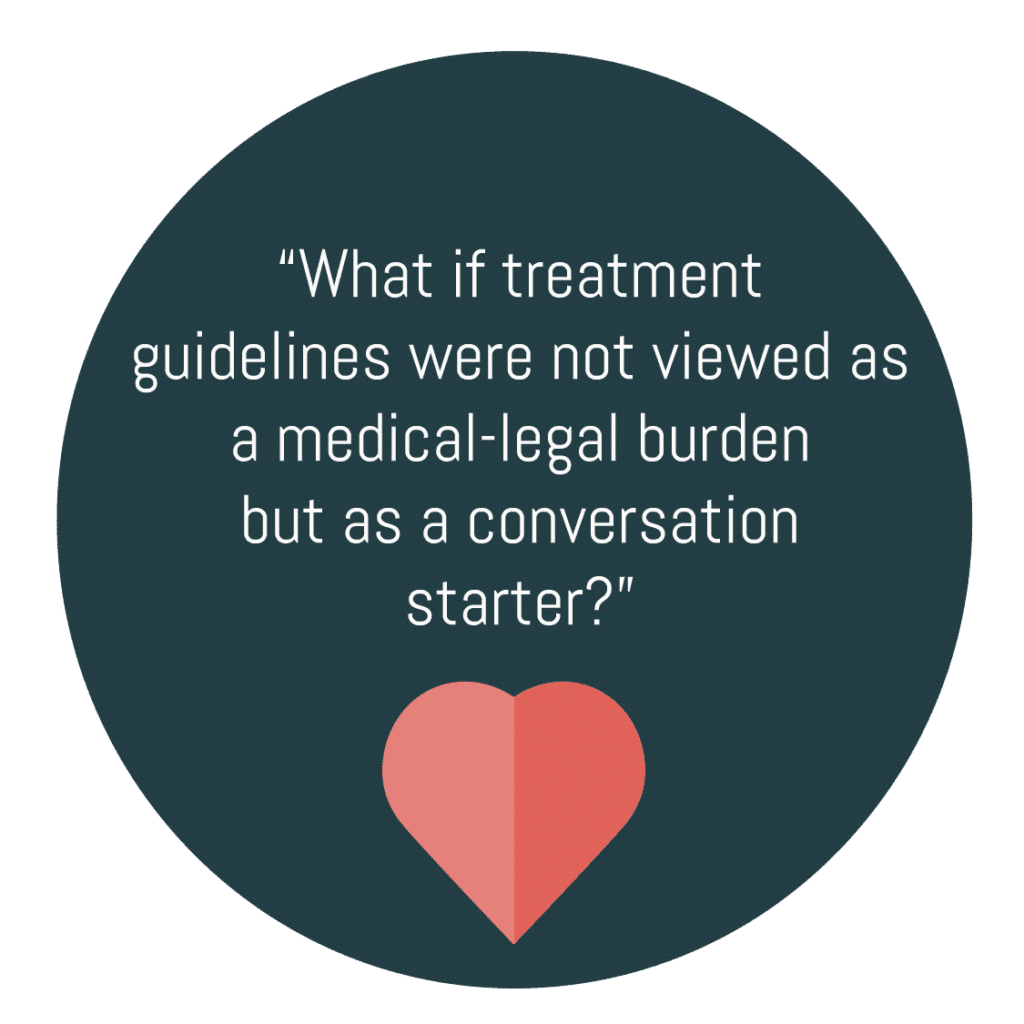 This piece was written by Mark Pew, Senior Vice President of PRIUM. He is a passionate educator and agitator and has been focused since 2003 on the intersection of chronic pain and appropriate treatment. That ranges from the clinical and financial costs of opioids and benzodiazepines to the corresponding epidemic of heroin use and the evolution in medical cannabis. Recipient of the 2016 Magna Comp Laude award and named one of the“Best Blogs of 2016”, you can find him on Twitter and LinkedIn.